Hi All,
We might not have seen even one dolphin but we did see our first ever Barn Owl.
We were trying to escape some rain showers that just kept coming our way. We ended up near North Caicos and decided to motor around the marina, which is huge. There are canals that meander all through the mangroves. This marina was another Island project that never took off. There is dock space for many many boats but there are only a few boats that actually use it. I think the idea was for people to build homes along the canals and keep their boats out front.
We were poking along way back at the end of the marina and had just gone under a bridge and were flanked by mangroves on one side and a steep limestone bank on the other; when we saw this rather large Barn Owl. He was perched in a sort of cave that was made from parts of the limestone giving way leaving large indents in the bank. He flew off into another hollow then off to perch on a Casuarina tree all the while keeping an eye on us.
Apparently animals of the night like Barn Owls and bats seek refuge in these limestone caves during the day. 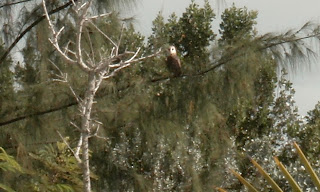