Hi All,
The weather turned nasty yesterday and we came in early enabling me to catch up so here's what I did.
This clip is from Saturday the day  I swam with JoJo as he circled around and around the big motor yacht Sea Dancer. Toward the end of the clip JoJo was following me to Spy Hop. It's really hard to swim forwards while filming backwards! Please keep that in mind as you watch!
I also spent most of the night with apple to figure out how to get video from camera to iMovie so I could put JoJo leaping to music and here's the result!
Posted by Jay Sargent at 4:03 AM 2 comments:

There is NO doubt JoJo is healed and Frisky as Ever

Hi All,
The weather has given us a gift! There is almost no wind and the sea is flat. We are heading out of Leeward and starting the search for dorsals when I see a large dark shape in the water. I get in to investigate. I see a rather large gorgeous manta ray in front of me. I swim slowly behind as it slowly flaps it's massive wings up and down. The longer I stay the slower it goes. It knows I'm not a threat and starts to sway back and forth slowly in front of me and I imitate by swerving back and forth behind it. We are doing a sort of underwater dance. Occasionally it turns to look at me with it's big round eyes and Star Trek sort of head. I got to have this dance for a long time until a dive boat came by, curious why we were stopped. 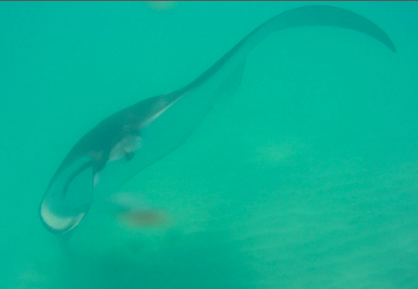 We then start cruising up and down the coast in search of dolphins. Once again we see Tropic birds soaring way above us as we were traveling along beside the cliffs of Pine Cay. 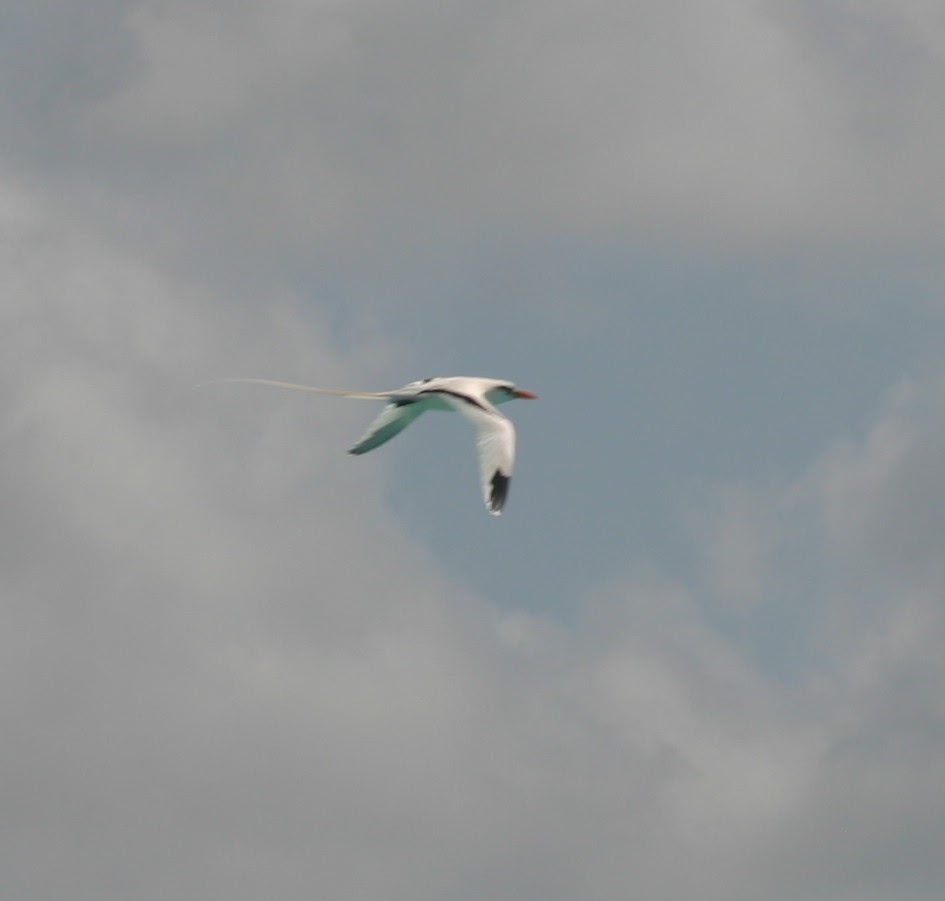 It's now the middle of the day and no dolphins. I see a friend of ours boat (Oscar's boat). They have a film crew on board with Dean Bernal. They are also looking for JoJo. The plan is to do a show with 5 friendships that are out of the ordinary. JoJo is one of them. Dean is the person who originally figured out that JoJo wanted to be friendly with people but didn't want them to touch him. He was the first person to have a long relationship with JoJo. I'm hoping that they will include me as a sort of wrap up of who JoJo is friends with now. We motor over and they ask us if we've seen JoJo. On a perfectly flat day one would think it would be easy to spot a dorsal!

http://youtu.be/c2vpRDLwgzg
I call Flipper Lady to see if she's seen JoJo from her condo that over looks Grace Bay. She hasn't seen any dolphins either. We swing by and pick her up since I know she is obsessed by seeing JoJo. After traveling all over Grace Bay we head back up to Pine Cay and there he is entertaining a big yacht. I get in and have a very long swim with him. I was able to entice him away from this boat and come over to Spy Hop long enough for Flipper Lady to get a short swim with him. When this boat took up their anchor JoJo followed along in their wake and we motored along with them. They were having a Birth Day celebration with champagne and balloons. Not bad to have a dolphin join your B'day party! When they sped up the fun began!!! JoJo came to us and fell in behind us. Then two other boats came by with boat captains I know. When the boats came really close it formed a big wake and JoJo performed some aerial acrobatics. Please ignore all the whooping, clapping and carrying on. We got pretty excited. JoJo of course is the ultimate showman!
please go to U Tube my video was too long!

Posted by Jay Sargent at 7:58 AM No comments:

How Great is This

Hi All,
Another fabulous sunny day in Turks, we are heading out of Leeward with a couple from Ocean Club that would like to meet JoJo. We turn down Grace Bay and I tell them the usual "don't get your hopes up we might not find him".
HERE'S JOJO, he comes swimming up to our boat and right down the center.  He wants a ride to Pine Cay. Off we go with numerous tour boats coming by with their passengers cheering wildly every time he surfaces. JoJo just wanted a ride so he could have breakfast at his favorite fishing spot. After breakfast he wants to go back to Grace Bay and he hails his favorite taxi, Spy Hop to take him there! Now for the best part, we get to Beaches where the water's so amazingly clear and I get to spend some quality time with my buddy. We swim through the finger coral, JoJo taking the opportunity to scratch; we play bang the buoy; we check out a downed wind surfer. If this wasn't enough activity JoJo goes over to the Beaches dive boat and performs a few ariel leaps in their wake.
Now, its time to head back to Pine Cay and off we go. As we head down the coast of Pine Cay, I see two lovely Tropic Birds with their long white tails gliding high above us. These pelagic birds are here to nest in the cliffs and have their babies before heading back to sea for the rest of the year.
JoJo has now gone off and we are traveling back toward Leeward when I see a huge splash out beyond the reef. I keep watching to see if maybe it is just a wave hitting the reef but I don't see any more splashes. The whales have pretty much gone by so what am I seeing? I decide to mention this sighting and we go out to investigate. We head out past the reef and drop our hydrophone in the water. We don't hear a thing. We head back and I'm wondering what could have made that big splash, when I see a spout!! We motor over to where we think the spout came from and again drop the hydrophone in the water. This time as soon as it submerges, we start hearing all sorts of high pitched squeaks, low groans, barks and other unearthly noises. We see more spouts this time. It appears there may be three whales from all the spouts. John gets in and swims over toward them. A mother and calf come right by him. He gets back on the boat elated to have a great whale encounter. As we start to leave them, we see the escort going along the reef to catch up to the mother and calf. It pays to keep your eyes on the water!!
Now our guests maybe a bit crisped but are over the top at having so many adventures in one outing! As we again start back toward Leeward who do we see but JoJo coming along in the other direction. I get in and he's slowly traveling in circles along the bottom. He then regurgitates some fish remains and heads off toward Pine Cay! This behavior doesn't call for alarm, I have seen it many times!
Posted by Jay Sargent at 4:15 AM 1 comment:

Hi All,
As I look down from our plane, I see there are no white caps. I'm thinking, "How long will it take us to get out on that water"! It's early afternoon as we touch down, the temp is 86 and Tina's Taxi is waiting to take us to Ocean Club. We drive along Leeward Highway and I see that the Lignum Vitae trees are all in bloom. They have brilliant blue flowers. We get to our condo, grab the essentials then off to The Shipyard where I drop off John so he can motor around to Blue Haven and pick me up. We're off!
We go out Leeward Channel turn down Grace Bay partially because there is a huge dark cloud but mainly because Flipper Lady has been keeping me updated on dolphin sightings in front of her resort!
We see a dorsal in front of Seven Stars. It isn't JoJo and who ever it is, is darting all over fishing. Then we think we see another dorsal! Whoever they, they are fishing and moving all over. When one settles down, we motor over and I get in to find Raggedy Ann who graciously swims slowly so I can follow along. Zoom!! Who's this flying up to me! JoJo appears so suddenly I didn't see him coming. He gives me perhaps the best greeting ever. All I can think is how can I leave this dolphin for eight months when this trip is over.
He swims off slowly then picks up speed to go find Raggedy Ann (RA). I get back in Spy Hop and John tells me he watched JoJo come flying up to greet me:). Not to be a sap but, it's a pretty great feeling!
We find JoJo and RA and as I get ready to climb back in the water, a tour boat barges in and one of the crew leaps in the water (soft landings are better). Needless to say RA and JoJo disappeared for quite awhile. We are looking around when JoJo surfaces right beside us! RA has had enough of humans and is no where to be seen. JoJo wants my company and I can't wait to join him. Some friends of ours are watching the whole thing from their boat. They have a really nice dog on board. I'm hoping I can make the introduction but I couldn't convince JoJo that he should go to their boat and meet Oscar! We go off for a nice swim over a coral reef where there all lots of fish. I see a really nice ballon fish which I thought you could see in the video clip. Unfortunately, it was behind JoJo and I didn't get it in the frame. You will see how great his gash looks. A true testament to the healing power of dolphins. A para-sail boat has come by to see JoJo. We give them a quick hello as we swim by it . Now we are back at Spy Hop with JoJo right at the stern. It means JoJo would like a ride somewhere. I climb in and off we go with JoJo in our wake. All is right in the world!
Posted by Jay Sargent at 4:42 AM 1 comment: 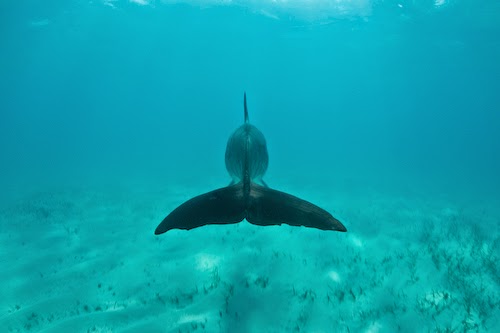