Hi All,
Apparently this front is here for the week. There were rain showers through out the day as well as fairly big waves which makes dolphin watching tricky.
We went out in the afternoon after my pacing around the condo watching the rain showers come and go. We started the search going down toward Grace Point. We noticed a kite boarder waving on the beach and after determining he wasn't doing some sort of aerobic exercise we went over to see what he wanted. His buddy had lost his kite board somewhere out there! We took him(Joe) on board and hunted around but were unable to find it. I think the seas have claimed it! After dropping him off, we continued to Grace Point but no dorsals. On the way back I spotted two dolphins way out by the reef swimming at a good clip. As we motored up we were pretty sure one was JoJo but I couldn't find him when I got in. Between the waves and the murky water I was like Mr Magoo swimming around. We saw them once again heading toward Leeward but couldn't get close. We then noticed an Osprey land in the water with a HUGE fish! He kept raising his wings out of the water to perhaps dry them a little then try to fly maybe 5 feet before the fish weighed him down and he'd plop back into the water. After many attempts he finally gave up and left the huge fish to sink into the water as he flew to shore. We were really rooting him on but couldn't think of a way to help.
We saw maybe the same two dolphins fishing a little past Leeward but it was too wavy and they were swimming too fast for any interaction. We opted for a fast trip back to the marina with another rain storm at our heels.
Even though I didn't get any good interaction, I feel I know where he's headed at least toward the end of the day and this will help with finding him again. Now I'm hoping the two young dolphins, JoJo and Raggedy Ann join up and they will 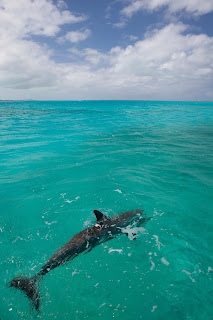 let me swim with them. JoJo has been hanging with Raggedy Ann for at least three years that I'm aware of probably much longer. She usually doesn't want to swim with me unless Bo is around. JoJo is apt to come over briefly as if to say "Hi  I know you are here but I'm busy with Raggedy Ann". The other day was an exception, when I got to swim right between her and JoJo.
Posted by Jay Sargent at 2:39 AM