JoJo and The Pod 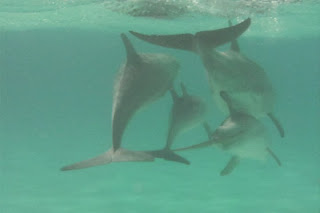 Hi All,
We found JoJo with a mom I don't know, a calf and two bigger dolphins that may be Lemon Lips and B.B.Tip. The waves were still big and the water very murky making identification hard. They seemed fine with me swimming along with them but I had a hard time seeing them even when I was right over them. John told me they all waited for me a few times but I just couldn't see them.
I'm wondering if one dolphin was Lemon Lips because there was still a slight yellow tinge to his lips! This dolphin wanted to come to me but didn't behave like Lemon Lips. Maybe because he's now a three year old he doesn't display the same behavior, circling me at speed zooming off and returning to circle me some more.
We witnessed a lot of spy hoping as we watched from the boat.  They either wanted to know whether we were still there or maybe the calf just wanted to look at us!
We were with them pretty much all day. Traveling from Grace Point to the opposite end of Pine Cay. There was one moment when the water was a bit clearer where they were all milling around me. It is worth spending all these hours following them for that one moment!
I hope today the water will settle which will help with clarity. I plan to wear my GoPro on my wrist for some filming in case the water is better and we find them.
Posted by Jay Sargent at 3:24 AM