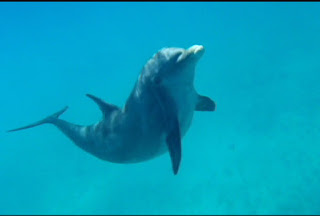 Hi
We head home today but got some nice time with JoJo yesterday. the water is still very rough but getting better. I suppose it will be great as soon as we leave!.We found him out in front of Coral Gardens. He came to our boat and took a ride to Smith Reef where he branched off and I got in and had a nice long swim with him. First he was following me and we went along the coast then he came beside me and I free dove with him so fun! Eventually he sped up and I got back in the boat. He fell in behind Catch Ride and stayed behind the boat all the way til we were out in front of Pine Cay where  he wanted to fish almost in the same place as the other day.The water was very deep and murky where he fished. He left us not sure whether he went out past reef  or some where else.He can be a stealth dolphin!
He was doing a lot of echo locating when I was in with him I think he's trying to see if his friends are around. I was hoping he would meet up with the mother and calf we saw when we first got here.
Posted by Jay Sargent at 3:05 AM No comments:

A day in the life of JoJo 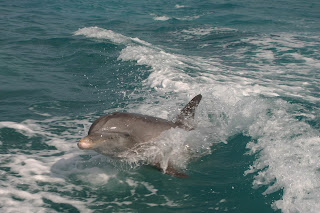 Success even with pretty big waves we found JoJo. We had looked all over Grace Bay and were returning to Leeward when I saw him heading toward our boat. He wanted a ride toward Pine Cay.
First Reef Peepers tried to steal him away after I graciously pointed that he was in our wake!!JoJo however choose to stay with us but shortly there after branched out toward the reef. I got in and we swam together for awhile he was following me I get the feeling he wants to use my drag affect! He then went to the back of our boat indicating he wanted a ride again sooo off we went. The waves down the coast in front of Pine Cay were pretty big making it a rough ride. When we got opposite The Meridian Club which is almost at the end of Pine Cay he branched off again. An Ocean Vibes boat was there and he went over and swam a bit behind their boat as if he wanted a ride from then (opportunistic dolphin) However he didn't follow them when they drove off instead he went out toward the reef and fished.I got in even though it was so murky I couldn't see my own feet never mind where JoJo was going when he dove deep. I would hang there for 3 or 4 minutes and he would surface with a loud PFFFF right beside me! He eventually made his way farther out toward the reef where the waves were seriously large. I got back in Catch Ride our boat and we followed along trying to keep track of where he was fishing between the big rollers. At one point John got caught off balance and there was a loud crash as he fell. Luckily he only got some bruises. We lost sight of him with all the excitement. I figured he might end up in the channel between  Fort George and Dellis Cay but he didn't show up. As we turned to go back down the coast I saw Ariel a pretty catamaran charter sail boat. I figured he might be there he loves to scratch on their big anchor line. As I'm thinking this, we get a radio call from Claude Ariel's Captain telling us JoJo is with them! I knew it!Claude had helped us with our boat when we were having engine problems last Xmas day. I had then given him one of my books "JoJo and Me" When we got there  JoJo was happily swimming up and down the anchor line scratching away. He heard our boat and swam over toward us. I got in and we had a nice swim I wanted to take him back to Ariel as it would have been pretty rude after Claude called us to take him off however JoJo pretty much goes where he wants! as luck would have it JoJo decided to go back to the anchor line for more scratching. There were all kinds of swimmers in the water JoJo just kept swimming up and down the anchor line pretty much oblivious to all the poeple watching him.It may have been no big deal for him but John over heard one girl say it was the best experience of her life. he wanted me to see the anchor which was right near a big rock not sure if he thought that was a problem or just wanted me to see the anchor. Eventually he and I headed out toward the reef as we were going along I looked up to see the tug towing a huge barge I figured JoJo would have to check that out and off he went to do just that. I got in catch ride and the tug Captain was pointing in front of his tug where JoJo was surfing the bow wave!
Posted by Jay Sargent at 2:01 AM No comments:

Hi
today was the first really nice day down here (not that any day in T and C isn't great). We took our boat from the marina out the south side which was totally flat. We found 5 dolphins none of which did I know. It seems the dolphins that are out front don't mix with the dolphins that are out back! Just speculation. We watched them fish for a long time because there was no wind and it was so flat you could hear them surface and breath pffff. The harder they fished the loader their PFFFFF. There were two dolphins quite close they appeared to be playing catch with a fish as we saw it hurtling threw the air between them!! At times a needle fish would come out of the water vertically and scoot for a good 50 yards at the surface of the water sometimes with a dolphin in hot pursuit.
At the end of the day we were in front of Fort George Cay when I saw a dolphin coming our way!! It was JoJo however after a brief visit he was off on a mission. I think he just came by the boat to say a quick Hi but he had another agenda at the moment! so glad to see him so glad he's ok.
Posted by Jay Sargent at 6:42 PM No comments:

Hi All,
I wish I could tell you I've seen JoJo but I haven't found him yet! Before sandy hit I heard from three people who had seen him. One boat Captain said they saw him with a calf and mom. Sandy had a hugestorm surge here lots of hotels lost beach front. Ocean Club had sand come way up the stairs and almost covered Mike's water sport stand. They had to use a tractor to remove the pile up in front of the resort. Many of the docks down the beach lost all thier boarding.
Hopefully as the seas come back to normal JoJo will come around. This is normal behavior for him.
Jay
Posted by Jay Sargent at 2:27 AM No comments:

Hi
here it is again because I left out a -
Jay

Posted by Jay Sargent at 3:43 AM No comments:

Hi All,
Welcome to my website the friends of JoJo pages will be coming soon. This first blog is a request from all of you!! There is a group  out there that wants to open up a swim with the dolphins program in Turks. This is like sending JoJo and Lemon Lips to jail. It would also support the capture of wild dolphins from the Cove. The Cove is where they round up wild dolphins and either slaughter them or sell  them to marine parks. Please open up this link and sign the petition to stop this terrible program from coming to Turks.
Thanks
Jay
https://www.change.org/petitions/turks-and-caicos-government-stop-thedevelopementof-a-dolphin-attraction
Posted by Jay Sargent at 3:00 AM No comments: