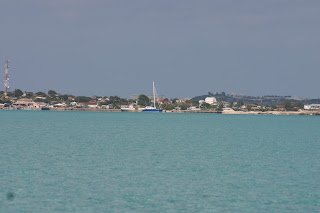 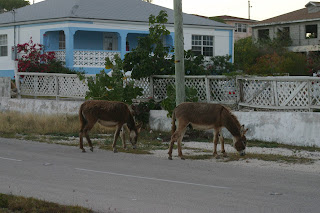 Hi All,
John and I have been thinking about a trip to South Caicos for a long time and finally made it. We took our 15 foot Boston Whaler across the South Bank to South Caicos. It was a long and bumpy ride but well worth the trip. Our friend, Bruce from Caicos Marina not only gave us his GPS to guide us over the bank but, set us up with his mother, to stay at her home and his sister who brought us to a place where we could rent a car. This gives you an idea of how nice the people from South Caicos are!! grew up on South Caicos but now lives and works on Provo.
South Caicos is a very small community. The people live mainly from the fishing industry. We saw numerous home-made boats pull into the harbor to unload their fish, which were cleaned at the dock. On that day we saw Hog fish, Rock Hind and a big turtle :( being cleaned. Turtles have been a food source on the islands for hundreds of years and killing turtles is not outlawed yet in The Turks and Caicos Islands.
We were met at the dock by Tina and Amber, Bruce's Mom and sister who brought us to Tina's house and then down town to rent a car. Once we were situated, we went back to the dock where we found one of the two restaurants in town. As we were eating a delicious fish sandwich, served by Judith who  told us her name and wanted to know ours.  I saw two huge splashes out on the water. Those splashes could only be from a whale. After lunch we returned to Catch Ride for some snorkeling followed by a search for dolphins that Bruce said frequent the waters around South Caicos. The snorkeling was great! The reefs were very healthy and the water as clear as I've ever seen. There were also some of the biggest barracudas I've seen watching our every move. Actually, there were a lot more of them!! We then toured around the Six Hills Cay not far from South Caicos. As we came around the ocean side of the island toward the shallower South Bank side of the island, I saw another big splash. I asked John to turn back and we headed out into the deep water of the Columbus Channel which runs between South Caicos, Ambergis Cay, Grand Turk and Salt Cay. We saw spouts fairly far out but the water was very calm so we ventured out. We thought they looked like mother and calf resting on the top. Just as John was about to climb in for a visit and a little footage with the GoPro, I spotted the biggest shark I'd ever seen!!! It was not a friendly Reef shark, it looked like a serious, big shark, almost as long as the boat. It was cruising around at the surface. It seemed strange that a shark would be so close to the whales. I can only guess that maybe the calf was having problems and the shark was stalking. In any case, John elected to stay in the boat!
We didn't find any dolphins much to my disappointment and returned to put our boat up for the night. We then went for a drive around the town. The island as you can see has donkeys and horses roaming around. We heard also heard there is a cow named Oreo that also frequents downtown. Everyone waves or says "Hi" if you are walking around town. I was asking directions from a guy who was waiting for his ride. He introduced himself and asked my name before telling me how to reach my destination!!
The next morning we went to see the other end of the island where there is a big cliff that over looks the ocean. The dirt road took us to the top of the cliff where the view was amazing.The sky was a brilliant blue and Tropic birds hovering above the cliffs where they were making their nests. Some were soaring over the glistening, flat sea with their long tails floating out behind them. The plan is to put a resort called Sail Rock up on this cliff. At present, there are a few buildings already complete and almost ready for occupants.
After move island touring, we decided to head back before the wind picked up. It can be a really really long ride if you are heading into the wind and the waves kick up. As we passed through a very narrow channel with sand bars on either side, John noticed some rays heading in the same direction. We counted 15 Spotted Eagle rays going the same way we were. They were so easy to spot since the water was only about 5 feet deep.
I would highly recommend a trip to South Caicos if any of you want a trip back in time to a very friendly place!!!

Hi All,
Thought you might enjoy this. We have seen more rays this trip than any other. We counted over 15 on our trip back from South Caicos. My next blog will have a few pics form South Caicos.
Posted by Jay Sargent at 6:07 AM 1 comment: 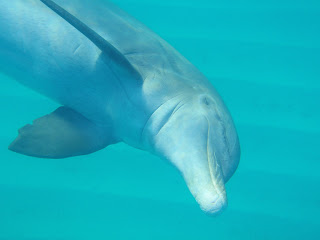 Hi All,
We found two moms with their calves. JoJo wasn't with them when we first saw them. The water was wavy and not clear. When I got in with them, they came by but I couldn't tell who they were. To make matters worse my scooter wasn't working so I had no chance of keeping up even though they weren't
trying to get away. After swimming with them as best I could, I climbed back in the boat and saw a single dolphin heading our way. He was going in the opposite direction from the others. It was JoJo. Maybe he split with them earlier to do some fishing?! He went one direction and they went the other. Because the water so murky, we couldn't find him so decided to follow the others. We eventually lost them as they headed toward the reef where the swells were pretty huge!
We turned back and had a few boat captains point so, we knew JoJo had been seen heading toward Grace Point. We found him circling a para-sail boat. I got in and saw he had a new cut. He had what looked like two small puncture wounds on his left side with a long but not deep scratch. He also looked like he had brushed his fluke against something as there was an abrasion. None of these cuts seemed very deep. I have never seen a puncture wound on him before and hope it isn't deeper than it appears. We swam together around Catch Ride for awhile then JoJo swam off sideways! toward the reef. After I got back in our boat, we caught up to him and he followed us for awhile but kept branching off. We lost him as we turned off to go around a reef. This will probably be our last swim for this winter as a front seems to be moving in and the swells are huge!

Posted by Jay Sargent at 5:29 AM No comments:

Hi All,
I have been hearing that there are big pods of dolphins out past the reef and we finally found one.
Yesterday, was a gorgeous day with flat water. We saw our first Tropic bird of the season. They are pelagic birds that come to nest on the remote cays of Turks and Caicos.  They always show up in March and they were right on time! We got to watch her  soar way above our heads. Her gorgeous long tail is her trade mark.
We were at the far end of Pine Cay looking for JoJo. I had heard reports that JoJo has been seen with a young calf and mom in this area. Usually when there is a new calf involved, we can't  find JoJo. When they are ready to be seen they will be out on Grace Bay.
We decided to go out past the reef as the water was perfect for seeing whales (finding dolphin pods!!)  John saw dorsals heading our way and there were lots!! As they got closer, I slipped into the water.  They swam by me and I followed along counting at least 12. I didn't recognize any of them. There was at least one calf who had a mom and maybe aunt swimming with him. Once I couldn't keep up, I got on the boat and watched as they played, porpoising side by side clear out of the water, tail slapping, swimming upside down and any number of other fun dolphin activities. We got to stay with them for about 45 minutes then Poof they were gone!! As we motored back looking across this beautiful flat sea, I saw something leap way out of the water like a big dolphin!! It was way in the distance and as we were approaching we could see spouts and dorsals. I had seen a Humpback calf porpoise like a dolphin!! He was playing around, tail slapping and surfacing. We watched them for quite awhile then they continued on their way and we headed for home.
Posted by Jay Sargent at 4:18 AM No comments: